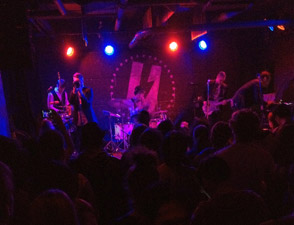 I think I just saw the future.

First, I still appreciate the full album experience over a handful of good tracks. Second, because of various other life factors (getting older, changing priorities etc), there's been less music consumption in my life. Spotify changed that. Because of Spotify and a $10 monthly subscription, I am now catching up on all that I missed and hearing so much of what's new. Without a doubt, the album that's at the top of my list--the list of things I missed and now can't imagine being without--is Matthew Dear's Black City.  Tonight's live performance permanently sealed a place for him in my sonic heart.

The vibe for Dear's set at DC's U Street Music Hall was perfect in so many ways. Not that many DCer's are going to go to a show where the headline is scheduled to play just before midnight (on a work night). This translated to a non-crowded and elbow free show with great lines of sight. I was a little surprised to see what I did--a full, but not excessive drum kit, a bizillion and one effects pedals (OK, less surprised by that one), a beautiful black Les Paul guitar--and a guy near the front of the stage with a trumpet. That trumpet, excellent bass lines and various synthesized echoes created Dear's swirling, dark, and wonderful sound.

I thought of a lot other music during this show--e.g., Front 242, Nine Inch Nail's Pretty Hate Machine, Richie Hawtin/Plastikman--but despite reflections on various electronic performers, this was a rock show and probably the best one in my recent memory. It was like a rock show performed inside of a dark, futuristic submarine lying one million leagues below earth's surface for a scene in a movie like the 5th Element.

I nearly forgot--super kudos to U St. Music Hall. In how many venues/shows can you distinctly hear things like the high hat, the tambourines, the  gourd, a delayed and reverbed trumpet and the vocals (main and supporting)??!!! ...Yet also feel the full power of the bass, synths etc? It's way too rare. Ultimate credit goes to Dear for the superb arrangements (which deviated just enough from the recorded version of Black City to make it interesting), but I wish more venues would take a cue from U St (cough, cough, I'm looking at you Black Cat).