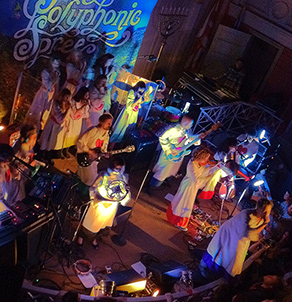 Is it your local church choir? No. Is it a cult? Maybe. Am I member? Probably.

The first time I saw the Polyphonic Spree, I had virgin ears. I saw them at a free show on a beautiful day on the outside plaza (Millenium Stage) of the Kennedy Center. I hadn't heard a single note from them prior to the event. In general, that means I'll have trouble getting into the performance. That wasn't the case at all though and that performance easily sits in my favorites list.

That first show got me into their recorded stuff, particularly Beginning Stages of.... I also listened to the Fragile Army when it came out, but it didn't compare to the enjoyment I got from listening to the former and remembering the show. So, I went to this show with minor trepidation knowing that they might very well focus on newer material. I also shelled out $40 for the ticket. Hopefully that helps set the stage.

My first impression after the show was, wow, these guys really make other bands look like slackers. There were 18 band members on stage and all seemed fully involved from start to finish in one way or another. Surely they all played their sonic role -- impassioned horn playing, heavy sweat inducing drum playing,  etc etc. -- but they also contributed to the theatrical elements, from dancing to an extended freeze (a la freeze tag), to a parade through the crowd before returning to the stage for the encore. And the band's leader, Tim DeLaughter (formerly of Tripping Daisy), served the role as a highly energized conductor and willed the audience into nothing more than a critical and seamless component of the set.

I may have been slightly disappointed that they didn't play more from the first album (in the same way I want to see GZA play Liquid Swords from start to finish), but they did more than enough to make the performance unique and enjoyable despite my (selfish) preference. From an opening where they came out from cover by cutting a whole in draped fabric in the shape of a heart, to renditions of the Who, they put on nothing short of a performance. It was also very healthy and appreciated in terms of length. The main set was as long as other shows I've seen in their entirety and their encore spared nothing.